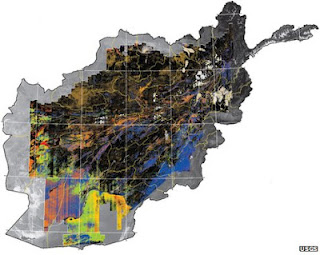 Afghanistan has become the first country whose surface minerals have been mapped from the air. The "hyperspectral imaging" produces reflections of light shone from an aircraft resulting in specific colors for different minerals.

The survey sponsored by U.S. Defense Department’s Task Force for Business and Stability Operations (TFBSO) and conducted by the US Geological Survey (USGS) has so far produced a mineral map which comprises more than 800 million data points corresponding to an area of 440,000 sq km, some 70 percent of the country.
In 2010, the TFBSO team had identified vast reserves of copper, cobalt, gold, lithium, oil, and gas in the country, estimating the value of the country’s reserves at a trillion dollars. In 2012, the first two of more than 30 world-class mines were put up for international tenders by Afghanistan’s Ministry of Mines. The exploration rights for a major iron mine was awarded to a consortium of Indian companies and a Chinese state-owned oil company won the right to explore an oil field.

Currently four large copper and gold mines are being tendered, with more than 20 companies from across the world participating in the bidding process. The early phase of the tender process for the Afghan-Tajik oil field has also begun. ExxonMobil is one of the companies that has filed an Expression of Interest to explore the vast oil field.

The recent USGS's hyperspectral imaging will now help to pin down which economically viable minerals are where.
"This is a tremendous tool for the Afghan government for locating and identifying its myriad rich mineral deposits," said TFBSO Director Jim Bullion.
"These maps clearly show the enormous size and variety of Afghanistan's mineral wealth and position the country to become a world leader in the minerals sector," Bullion added.

Posted by fixxxxxer at 5:34 PM No comments: